A survey of 20,597 households across Delhi, Mumbai, Chennai and Bengaluru to assess households’ perception of safety and the police, identify behavioural changes adopted by households to avoid victimisation, and estimate the incidence of crime.

A sound criminal justice system is required for ensuring the safety and well-being of citizens and creating an enabling environment for market-based economic growth. Public safety and security are critical for a good quality of life. While there seems to be an agreement on the weak performance of both the police and the courts, this has not yet translated into large scale attempt at reform. The official records on crime and response by the police are hugely insufficient in gauging the scale of the problem due to widespread under-reporting, among other deficiencies. These insufficiencies in official data prevent identification of core problems which plague policing and act as a roadblock to comprehensive reforms.

Safety Trends and Reporting of Crime (SATARC), IDFC Institute’s flagship survey, is an attempt to marshal evidence, in a systematic way, about the extent and nature of crime, satisfaction with the police, and perceptions of safety. The SATARC survey aims to bridge this gap in public data on safety and crime. It has a threefold objective to systematically assess households’ perception of safety and the police, identify behavioural changes adopted by households to avoid victimisation, and estimate the incidence of crime. Since the data from this survey is available at the police zone level, it has ample scope to serve as an effective management tool for the police by helping them develop informed and targeted reforms.

The fieldwork for the survey ended in February 2017 in four major economic centres of the country i.e. Mumbai, Delhi, Bangalore and Chennai. A total of 20,597 households were surveyed.

IDFC Institute has developed a new web-tool that allows users to assess the incidence of crime, satisfaction with the police, and perceptions of safety based on the SATARC Survey data. This tool showcases the SATARC Survey data through 30 questions, as well as by the 7 surveyed crimes, the 4 surveyed cities, and demographics of the respondents. All results are presented at the sample level.

Note: This work was done by the author/s when they were a part of the IDFC Institute and is republished here with permission. 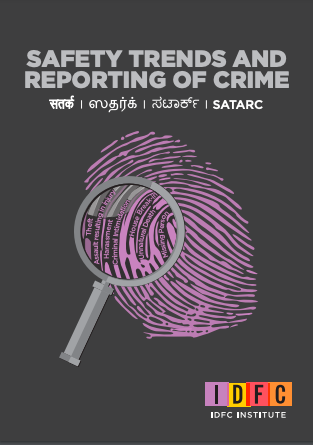 How Can We Rethink Police Accountability in India?

In this journal article, the authors undertake a temporal examination of police accountability measures in India.

This policy brief highlights many of the issues present in current Facial Recognition Technology (FRT).

The paper outlines the use cases of FRTs in the Indian context, unpacks the technological and institutional aspects governing FRTs and offers short- and long-term solutions that must be implemented before the wide-scale deployment.

A Study of Internal Communications, Motivation, and Agency in the Police Force

A study of police constables on COVID-19 duty in Madhya Pradesh to understand communication flows within parts of the police hierarchy.