The Indian Macro Policy Playbook: Time for a Fresh Look

Indian macro policy has been operating under an implicit 2-4-6-8 framework, but there is a need to take a fresh look at this macro policy playbook.

Indian macro policy has been operating under an implicit 2-4-6-8 framework, which are the targets for the sustainable current account deficit, the desired level of retail inflation, the consolidated fiscal deficit target embedded in law and the aspirational rate of economic growth. There is a need to take a fresh look at this macro policy playbook for two reasons. First, the individual targets have been decided at different points of time by different parts of the economic policy ecosystem rather than emerging from a common analytical project. Two, there are reasons to doubt its internal coherence given that India has rarely been able to meet all four targets simultaneously over the past decade.

The tricky political economy decision for the new government elected in May 2019 is whether to ease some of the economic stability constraints such as the fiscal deficit, the current account deficit and retail inflation in a bid to maintain economic growth at 8 percent; or continue to prioritise hard-won economic stability while facing the risk of social unrest as lower economic growth fails to provide the adequate number of jobs in formal enterprises; or put in place policy reforms that can help raise potential growth without creating periodic bouts of macroeconomic instability. This working paper argues in favour of the third option with five sets of policy recommendations, so that economic growth accelerates without putting economic stability at risk.

Note: This work was done by the author/s when they were a part of the IDFC Institute and is republished here with permission. 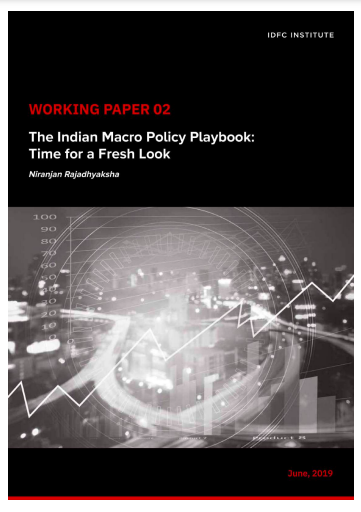 Opinion | What Indians think of the work-from-home shift

Indians were working from home 2.6 days in a week, much above the global average of 1.5 days, according to a new survey.

Opinion | The Return of the Supply Side Challenge

The latest edition of the annual central banking conference at Jackson Hole refocused attention on the immediate challenges.

Opinion | At What Point Should Central Banks Stop Monetary Tightening?

When central banks stop tightening will depend on a tough-to-estimate neutral rate that can keep economies on an even keel, writes Niranjan Rajadhyaksha.

In this piece for the Mint, Niranjan Rajadhyaksha, Senior Fellow and CEO, Artha India, documents India’s economic journey of the past 75 years and offers lessons for the future.