We use data from Meta's COVID-19 Trends and Impact Survey to understand vaccine hesitancy, access and trusted sources of information in India.

India is conducting one of the largest COVID-19 vaccination campaigns in the world, and administered over 1.5 billion doses in the first year. Being one of the few countries manufacturing vaccines, India rapidly overcame its supply challenges and had to face an unexpected roadblock: a low vaccine demand. While there might not be a need to conduct such large-scale adult vaccination campaigns in the future, the learnings from this campaign carry important lessons for routine immunisation as well as public health interventions in general.

To better understand the demand patterns for the COVID-19 vaccination campaign, we analysed the data from the University of Maryland Global COVID-19 Trends and Impact Survey (CTIS) in partnership with Meta from January to September 2021. The survey asked users about COVID-19 vaccine acceptance and uptake, preventive behaviours, symptoms, access to care, and risk factors. The survey has been running daily on Facebook across India and included 636,006 responses during the study period. Since Facebook subscribers are not representative of India’s population, our analyses take into account the survey weights developed by Meta, based on the number of respondents daily and the information about the population from the United Nations. Hence, our analyses are indicative in nature as we look at the weighted percentages and not the true percentages from the population.

While public debate has reduced low vaccine demand to vaccine hesitancy, low demand is in fact a factor of both vaccine access such as transport issues, appointment time, etc, and vaccine acceptance issues such as beliefs, fears of side effects, trust in the government, etc. 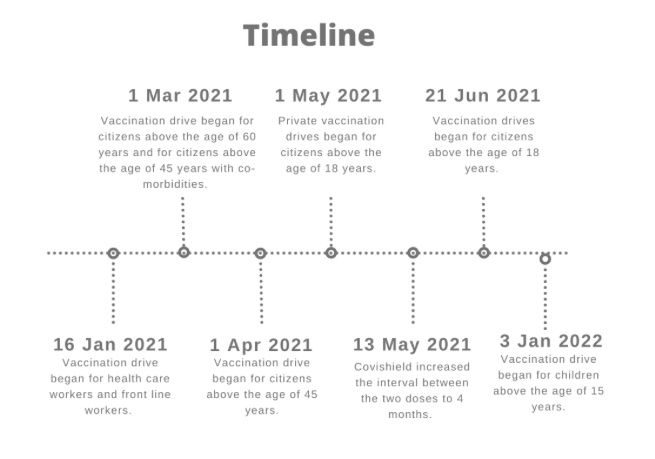 In May 2021, when vaccination opened for all adults, over 78.6% of participants declared they would probably or definitely take the vaccine if it were offered to them that day. The rate was similar in rural and urban areas. Although they were less likely to develop severe symptoms, the 18-44 age group was more willing to get vaccinated (80.1%) than the 65 and above age group (67.5%). This highlights the knowledge and attitude gap between health-related attitudes and beliefs and actual benefits of the health intervention.

Among those who said they would definitely not get vaccinated, the most common reasons were concerns about possible side effects (29%), belief that other people need it more (29%) and waiting to see if it’s safe (29%). Qualitative research we conducted in Maharashtra in June 2021 showed that fear of side effects includes two separate concerns: fear of serious or long-term side effects possibly leading to death or infertility, as well as fear of short-term mild side effects that would prevent vaccinated individuals from carrying on with their daily activities for a few days. Addressing these concerns requires both enhancing communication and supporting sick leave schemes.

Fear of side effects was the main reason to not be vaccinated in both women (34%) and individuals over the age of 65 (49%). For women, this could be due to the numerous rumours circulating regarding the impact of vaccination on fertility and menstruation and highlights the need for targeted communication campaigns.

Understanding the context in which the intervention is rolled out is also essential. Over time, concerns about side effects remained the major reason for not being vaccinated (34% in September 2021). Beyond side-effects, two other trends emerged during that period. The first one is the belief that respondents do not need the COVID-19 vaccine. This attitude increased as the number of COVID-19 cases decreased and the virus was no longer perceived as an immediate public threat. Second, trust in the intervention was linked to trust in government. By September 2021, 28% of respondents were not getting vaccinated because they did not trust the government. In a separate qualitative study we conducted in Maharashtra, we found higher hesitancy in minorities linked to their mistrust towards the government. 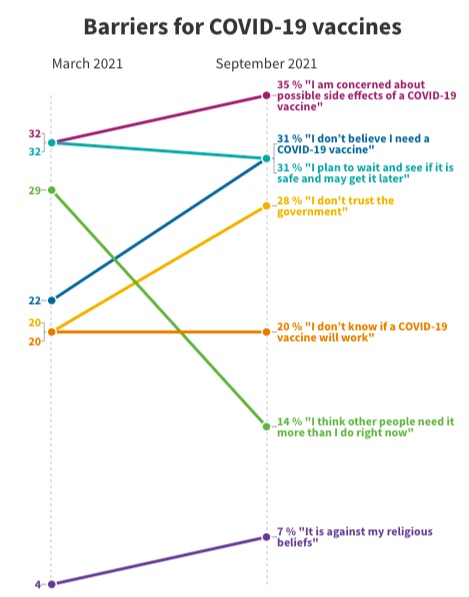 A major component of low vaccine demand are vaccine access issues. This includes access to information, to booking devices, technology or access to vaccination sites. In May 2021, over 60% of unvaccinated respondents who were willing to get vaccinated hadn’t been able to do so because they couldn’t get a vaccination appointment. Over 10% reported technical difficulties with the website or phone line to access vaccination. While there were still major supply issues at the time, these obstacles highlight the growing impact of the “digital determinants of health”. As the government pushes to digitise the health system in a bid to make it more efficient, a portion of the population gets excluded for not having access to equipment and broadband or not being digitally literate. Analog solutions and technical support should be put in place to address this digital divide. 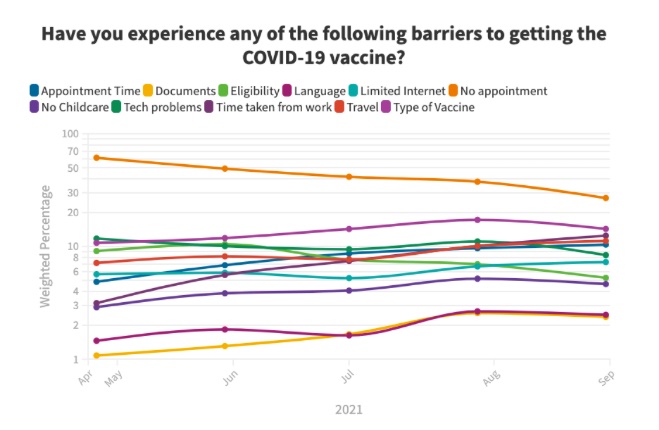 While public debate has reduced low vaccine demand to vaccine hesitancy, low demand is in fact a factor of both vaccine access such as transport issues, appointment time, etc, and vaccine acceptance issues such as beliefs, fears of side effects, trust in the government, etc.

The other major set of access issues are operational barriers: people reported not being able to get vaccinated because they couldn’t take time off work (3% in May and 12% in September) or couldn’t travel to the vaccination centre (7% in May to 11% in September). Research we conducted with a group of NGOs in urban slums of Mumbai and Pune also pointed out community barriers that are not addressed in the Facebook survey. In particular, women did not always have the agency to take the vaccine or travel to the vaccination site.

Finally, issues in accessing trustworthy information undermined both vaccine acceptance and vaccine access. In May 2021, 10% of unvaccinated respondents believed they were not eligible to take the vaccine even though the vaccination had opened for all individuals over the age of 18. Similarly, by September 2021, over 10% of respondents still felt they needed information on how to get the vaccines and 21% needed more information on the different types of vaccines. Nine months into the campaign, and despite significant media coverage, this shows that accessing trustworthy and reliable information remains a major challenge.

The pandemic has been marked by a high level of misinformation and frequent changes in recommendations – such as interval between doses or vaccination of pregnant women – that have left people confused and has dented their trust in traditional media. Building an efficient communications campaign requires identifying the most trusted messengers and shaping the messages (both vaccine-related and operational information) in an intelligible way. 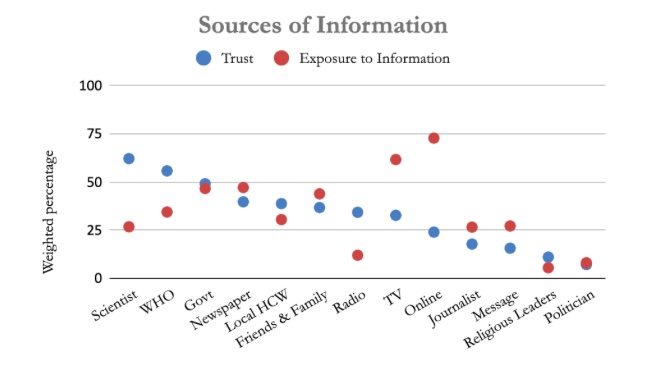 CTIS data on trust and exposure to sources of information pointed out a major mismatch between the two. Scientists are by far the most trusted source of information with over 60% of respondents listing them as trustworthy, followed by the WHO (55%). However, less than a third of respondents reported having received news and information through these sources.

The government is third on the list with 48% respondents considering it a trustworthy source of information. This is interesting as mistrust towards the government is a major reason cited for not being vaccinated. It could be due to the different levels of government considered by the respondents: for instance, an individual could trust the local sarpanch but not the state or central government. This is a point worth exploring to understand how to best shape government communication campaigns.

Highest distrust was observed for politicians, religious leaders and online media and messaging applications. Online applications are also the first source of information and more efforts should be made to make trustworthy voices available on this media.

Over a third of the Indian population remains unvaccinated or partially vaccinated. Based on routine immunisation data, it is likely this group is formed of the poorest quintile or religious and caste minorities which are known to have lower immunisation rates. As COVID-19 cases decrease and the focus shifts away from public health, India still needs to address health emergencies such as tuberculosis, antimicrobial resistance or the rise of non-communicable diseases. This will require evidence-based health interventions supported by tailored communication campaigns.

Contribution of infection and vaccination to seroprevalence through two COVID waves in Tamil Nadu, India

Voluntary masking should be the way forward

As Mumbai drops its mask mandates, Reuben Abraham and Lancelot Pinto reflect on the way forward to curb airborne transmission

On COVID-19 vaccination, don’t be complacent

Vaccine demand can be generated through the development of targeted action plans addressing both access issues and hesitancy. With only a third of the eligible population fully vaccinated, we don’t have the luxury of time

In this paper, the authors estimate age-and gender-specific mortality risk among all SARS-CoV-2 infections in four settings in India, and compare age trends in mortality with similar estimates in high-income countries